There’s a funny thing about us and live performances of “Switchblade.” Even if we’ve had the chance to witness quite a few of them and watched many videos, when we feel like playing ourselves a little “Switchblade” video, we’d still usually pick this particular performance. It is just exceptional and intense to the breaking point. It always leaves us somehow shaken and tripping down the rabbit hole into a land of amplified emotion. The performance that never fails to do that to us took place around two years ago in an intimate set-up of the Hotel Café in Hollywood. 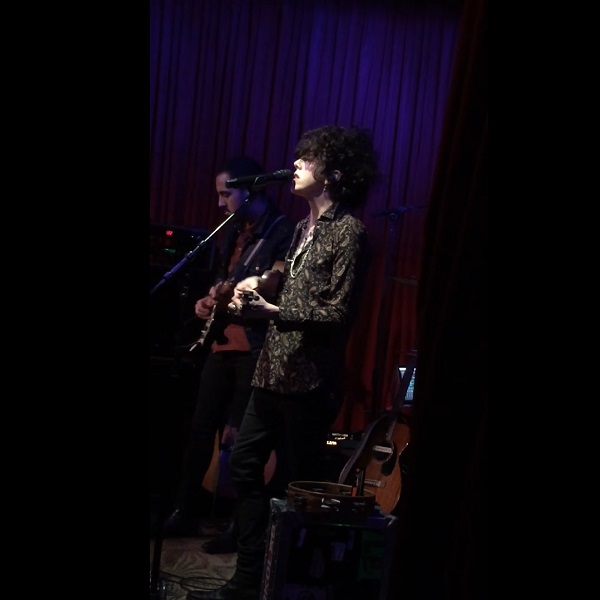 Many different elements combined to form how special this entire show seemed to us, even before it actually happened. It was LP’s first gig of 2017 and also her first event after she had spent a few months playing almost exclusively in Europe, finishing the year with her intense Lost In Europe tour in mid-December of 2016. So, when this petite American performance was announced, all the eyes of Europe were upon it , trying to work out what kind of event it was going to be, what is going on in America for LP and how one might go about seeing her in such a low-key place. It surely added yet another layer of tension to a performance which was remarkably charged in and of itself.

“Switchblade” has been one of these rare LP songs that, performed live, doesn’t seem to be tied to the crowd’s energy. Contrary to her other songs which get fueled by an intimate and very emotional dialog with the audience, it feels as though each ”Switchblade” rendition has been taken out of this LP vs. crowd exchange, and has only been dependent on how she feels in the moment of singing it on this very night. The song has become a sort of a device that, perhaps, allows us to peek at a fraction of the artist’s true state of mind. A bit like a gate opening up to something secret, not for you to see.

So, when “Switchblade,” with all its noble incrustations and deep intensity, is played in a place like the Hotel Café… Well, then it’s not only about this poignant song – there’s also something to a very unique energy thing going on when LP gets to perform in such a small, personal venue. When she takes her music to such places some kind of power cumulation process is triggered, and it influences everything – the way you feel about her music, her show and your very self, as a listener. You find yourself immersed in some kind of dimmed vibe, something that you feel but cannot put a finger on. Like walking through a forest at night. And walking through a landscape of darkened, enshadowed trees is definitely a feeling of the same pedigree as the Hotel Café performance of “Switchblade.” With every step bringing you yet another adrenaline rush. Something in you unfolds and grows and the next thing you know is LP has just pulled out a switchblade and performed a procedure upon your open heart.

We could probably go into detail of what this performance is to us and why. But it’s also so intimate that it feels almost too intrusive to elaborate. It’s to look closely, to listen, to feel, to connect. Here it is – just remember to be careful playing with this particular “Switchblade,” it’s fairly sharp.

✶ The performance took place in the Hotel Café in Hollywood on January 10th, 2017.

✶ Switchblade is a song written by LP, Nate Campany and Maureen “Mozella” McDonald, and produced by Mike Del Rio. The song was included on the Lost On You record. More specifically, it appeared on the deluxe version of the album released in continental Europe on May 5th, 2017, which was simultaneously a premiere release for the US and the UK.

✶ LP was accompanied by JD Carrera on the guitar. Don’t miss his most beautiful slide guitar in this performance!

✶ JD (J David Carrera) – an American guitarist, based in Los Angeles. JD accompanied LP for over one year, from her 2016 summer European promos and tours, right after “Lost On You” became a hit, through the American part of LP’s touring, up until the end of her 2017 Summer European tour. His distinctive guitar sound and incredible talent for interpretation beautifully combined with LP’s music and the sound of her voice, making many of their performances unforgettable. He used to bring a touch of dreamily profound Gilmour-ish sound to LP’s shows.

Before her gig, LP gave a short backstage interview, and it’s a real fun watch for a number of different reasons. We have it for you today together with a full transcript. The conversation is interestingly unbalanced and her laid-back answers give some funny contrast to the interviewer’s energy.  END_OF_DOCUMENT_TOKEN_TO_BE_REPLACED

A little bit of background. Somewhere around 2008, LP moved away from writing for herself. She dived deeply into songwriting for others, and was collaborating with many people in the industry, creating songs of very different genres. She usually calls this period in her career “songwriting school.” END_OF_DOCUMENT_TOKEN_TO_BE_REPLACED

This second interview, that we post today, does exactly the same, and it concerns exactly the same subjects. Watching it one after another is the closest you can get to time traveling, a kind of fast forward from August to October.  END_OF_DOCUMENT_TOKEN_TO_BE_REPLACED